Big Trout are back in The Bighorn River

However in the last decade or so the water management philosophy of the Bureau of reclamation has changed things a bit, but it’s important to remember that it’s still the Bighorn River and it’s still one of the GREATEST TROUT FISHERIES in the lower 48. The Bighorn River still boasts enormous trout populations and last year it produced some of the largest trout the Bighorn River has seen in a long time.

In 2017 the Bighorn River saw record setting big water and big trout. The average size of the Bighorn River Trout has been shrinking for more than a decade, but last year the big ones were back! Fishing guides reported catching fish larger than 22 inches on a regular basis. Not only were these trout lengthy, but exceptionally healthy and strong. All of these larger trout had shoulders and they used them. Giving anglers the fight of a lifetime.

Theories Why So Many Large Trout Were Caught in 2017

The first theory is that they were flushed over the spillway during the prolonged heavy discharge from the Yellowtail Reservoir. The idea being that the baitfish were attracted to the lights on the dam and the predator fish like walleye, bass and trout followed them up. While chasing the baitfish the predator fish were sucked over the dam and down into the river. Brown trout and Rainbow trout living in the lake eat a lot of bait fish and crawfish. These large food sources are much higher in protein and fat causing the fish to grow bigger faster. There is a slight difference in the color of a lake living trout and river living trout. Lake fish tend to be more dull in color while river fish boast vibrant color patterns.

The second theory is that these fish have always been in the river and the high water did something to make them more catch-able. The Bighorn river is fabled to have legendary trout and every year a few 22 inch plus fish are caught. In 2017 a lot of 22 inch plus fish were caught on the Bighorn River. This year different 24-28 inch trout were caught in the same holes side by side. The high water could have washed away a pre-existing food source or brought in a new one like the emerald shiner, which is very easy to imitate from a fisherman’s perspective. Which leads us to our next theory.

Theory number three. Due to the pro-longed high water this year, millions of Emerald Shiner minnows were washed into the Bighorn River and fish were targeting them. In fact fish were so concentrated on this new abundant food source that dead drifting a white streamer became the most effective way to catch fish on the upper three miles of the Bighorn River. The idea is that these fish were getting so much protein and fat so fast that they grew twice as fast and twice as big as they normally would in the spring and early summer. Making for fat healthy trout waiting to give an angler the fight of a lifetime.

Bighorn River Fishing Guides are on the water almost everyday in the high season. Nobody knows what's going on better than these folks.

Veteran guide Sean Fritzler gives us his take on the numerous large trout caught on the Bighorn River in 2017. 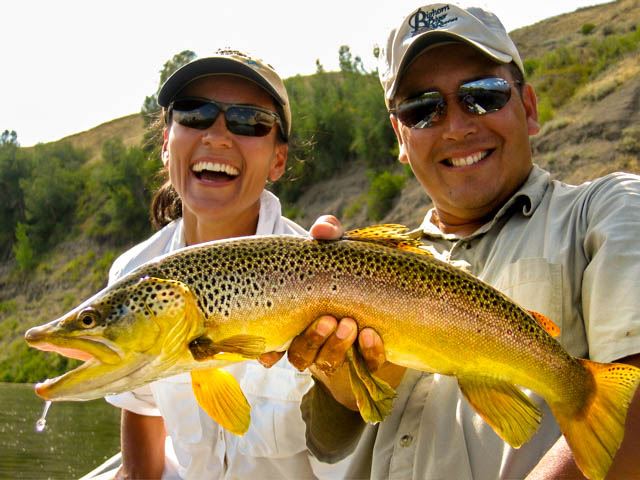 “Hi, my name is Sean Fritzler. I am a Crow Tribal member. I have been an Orvis endorsed guide for more than 25 yrs. I have seen the Big Horn in many different conditions over the years. In my opinion I think that this past year was a pretty remarkable year for big fish, but it wasn’t just guides catching big fish. The local and weekend fisherman were also catching huge trout on the Bighorn. Fishing guides on the Bighorn reported many 25 plus inch fish in the 2017 season. A couple of those fish in the 28 to 29 inch range, a monster in anyone's book! There were several guides catching fish in the 18 to 22 inch range on a daily basis. The last time I can remember big fish being caught like this was in the early 90's. It's hard to say what has attributed to the large number of big fish caught this past year. Maybe it was a combination of things. Millions of emerald shiners were coming over the dam and the trout were gorging themselves on them. There were days that Emerald Shiners were stacked up like cord wood on the banks of the Bighorn River. Trout population plays a big role in the size of the fish. I estimate there are about 4500 trout per mile. I have seen this river at 9500 fish per mile. It seems that you see bigger fish when river populations are between 3500 to 4500 fish per mile. As far as patterns, several big fish were taken on streamers this year. But there were also quite a few fish caught dead drifting nymph patterns. I also think there were quite a few lake fish that got into the river this year do to high water conditions this past year. Whatever it was there was a great number of big fish caught this last season.”

25 year veteran guide Wayne Egbert gives us his input on the number of large trout caught on the Bighorn River in 2017. 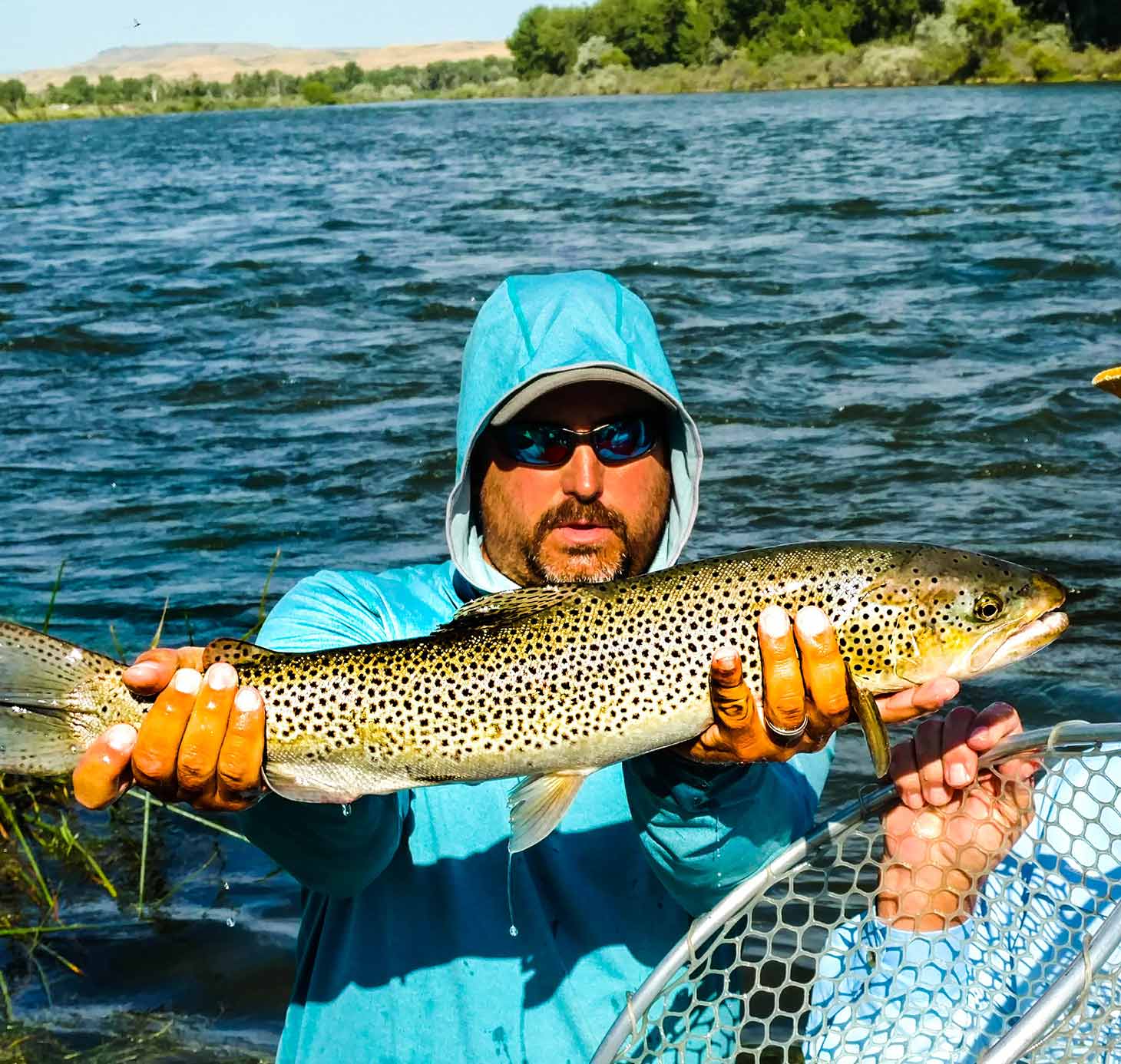 “Last year was closer to normal big fish years than we've had since the 2000’s drought years. Some big lake fish made it alive over the spillway, but I think most of the big fish came up river looking for the source of the Emerald Shiner explosion. Some big fish were caught on streamers, but most on nymphs just like it should be on the Bighorn River. My boat landed about 30 fish over 20 inches long, which is fairly standard, but I can remember catching 20-inch fish daily on the Bighorn River. In those times the giants were there for the taking from the dam all the way to Hardin. I don't think the Bighorn River fishing is going anywhere. It's been through drought and flood and we still have great fishing every year.”

Whether it be the Emerald Shiner fattening up the trout. Lower trout populations. Large trout moving upstream targeting the new abundance of emerald shiners flushed over from the dam. Or large trout that made it over the dam from the lake. The FACT is that BIG TROUT are back on the Bighorn River and it’s this writer’s belief that they’re not going anywhere for awhile.

Snow pack is high and although the Bighorn River Alliance is doing it’s best to promote better river management practices, Montana is having one of it’s biggest snow years on record. The Bighorn Basin snow pack is already 118% above average and the two upper Bighorn River drainages; the Shoshone and Wind ranges are averaging 133% above average snowpack. If history teaches us anything we should expect substantial spring precipitation. This all means it’s shaping up to be another high water year very similar to last year. These conditions could produce another big trout year on the Bighorn River. Although trout populations might be a little smaller the fish are getting BIGGER.

Check out our Fly Fishing Services!