Thousands of acres of wheat fields, grasslands and coulees are reserved for the exclusive access of the guests of Forrester’s Bighorn River Resort.

This is prime Montana upland bird hunting territory is designed for:

Here at our premier Montana hunting resort, you’ll find we provide unmatched opportunities to enjoy bird hunting, which is fast becoming one of the most popular of all sporting pursuits.

The irresistible combination of working alongside:

all add to the excitement as preparation for a day in the field are made. We encourage you to contact us prior to your visit with any questions you may have regarding gear.

Our experienced Bighorn resort hunting guides have been hunting for years and are ready to share their advice and tips. 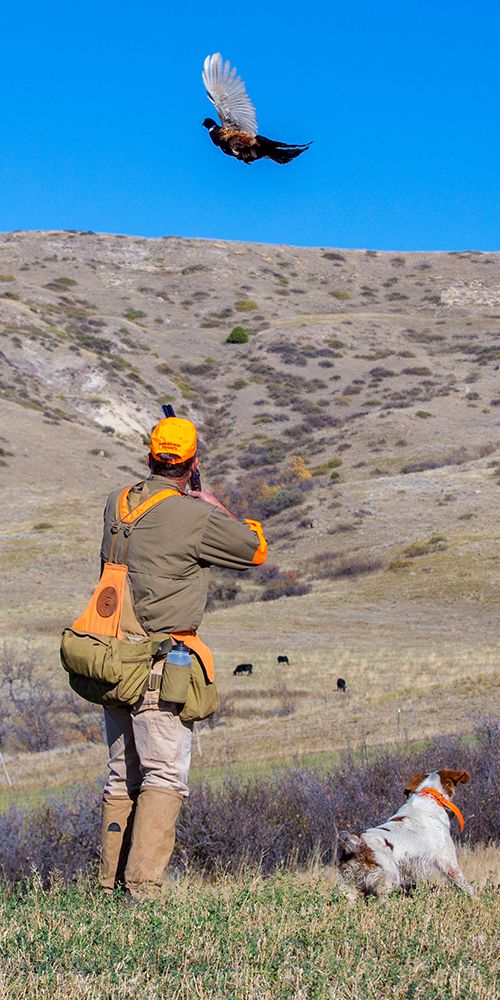 The upland bird hunting at Forrester’s Bighorn River Resort is made all that much better by who you share it with. Our Orvis-endorsed professional hunting guides are not only consummate hunting guides but represent three generations of Crow Indians as well.

Their devotion and unparalleled knowledge of the land and game you pursue will create a memorable and rewarding Bighorn bird hunting experience.

Likewise our kennel of trained Labs, Pointers and Brittanies are notable accomplices to a memorable day of Bighorn bird hunting. Working thousands of acres of bird cover they will make sure to put up plump birds all day long.

In the realm of pheasant hunting, The Ringneck Pheasant is perhaps the most common and well-known game bird in the world.

Ringneck Pheasants cover the most diverse habitat of all pheasant species and can be found in over 30 of the lower 48 states.

Like most birds and other animals, it lives a predictable life and follows a normal routine throughout the day.

The Ringneck Pheasant prefers to roost in areas free of overhead cover so it can quickly escape if a predator approaches it.

The most suitable roost areas for pheasant hunting include: 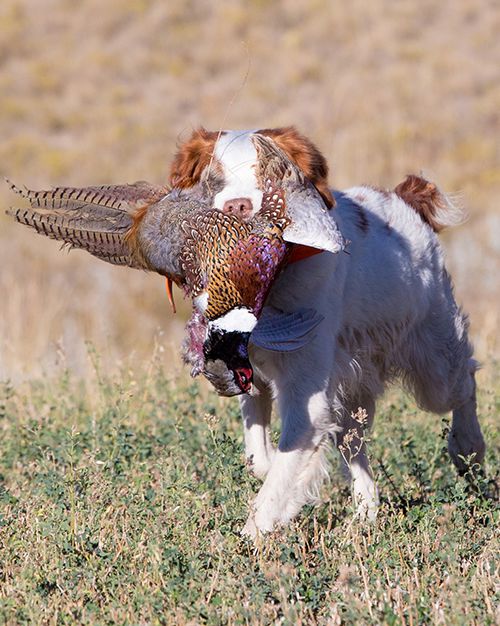 Sharp-tails are well known for being an elusive bird that will flush at very long distances.

They are found in Conservation Reserve Program (CRP) fields, in edge cover along creek beds and in woody thickets, which Bighorn has in abundance.

For experienced Bighorn bird hunting individuals, a sharp-tail can be distinguished from a hen pheasant by the prominent "chuck-chuk-chuk" sound emitted by a flushing grouse.

It is primarily a plant eater with some insect consumption in the fall including grasshoppers, crickets and beetles. 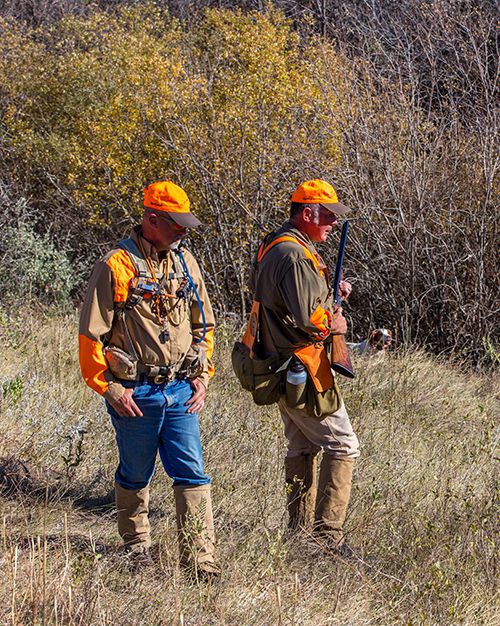 Also called the Hun or gray partridge, Hungarian Partridges are native to the bush plains of central Europe and western Asia.

It has been extensively relocated to many areas of North America, like Montana, after its initial introduction to the eastern seaboard states sometime in the 1870's.

During the years 1922 to 1926 the Montana Fish and Game Commission purchased 6,000 Huns in Europe and distributed them throughout the state, their presence in Bighorn bird hunting has grown vastly since then.

They may be found in:

They nest on the ground in shallow depressions in the grass or low brush. Adult Huns weigh in at roughly 12 ounces and range from 12" to 14" in length.

Both sexes look very similar, but males have a horseshoe-shaped chestnut patch on the breast.

The primary color is gray in varying shades. Their sides are barred with dark chestnut, and the red-brown tail feathers are conspicuous when the birds are in flight.

Their primary diet consists of:

In the summer months they also eat large quantities of insects. 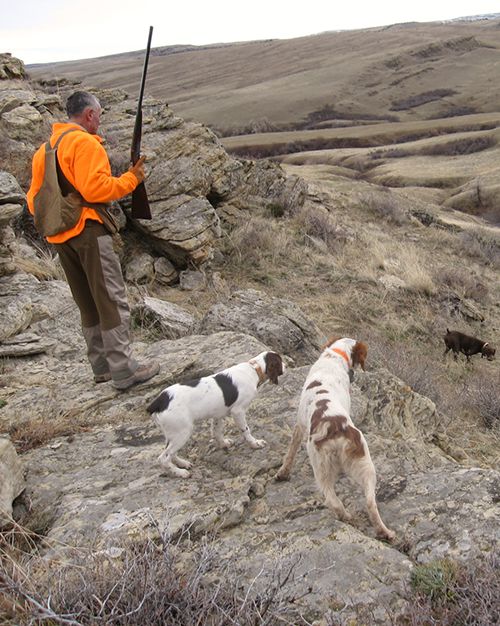 A Unique Offering, A Unparalleled Experience

While hunting & fishing in Montana, we offer a variety of packages that include a combination of hunting and fishing, the Cast and Blast is an altogether unique experience.

Getting Started: With the concentration on the waterfowl that is abundant on the Bighorn river, the typical “Cast and Blast” starts by getting out on the river and either “Jump Shooting” ducks and geese or if the birds are really moving then setting up with decoys is another favorite.

The Bighorn river offers plenty of opportunity for several species of waterfowl headed from Canada on their southern migration.

Perfectly positioning the drift boat for jump shooting is key as behind every bend and nook lends itself for some very exciting action.

Mid-Day Fishing: By mid day and the sun is high, the focus changes from shotgun to fly rod. This time of year lends itself to some amazing fishing.

The autumn brown trout are starting to stage up for the late fall spawn and they are eager for a fight.

Late Afternoon Hunt: As the sun starts to wain, the ducks start to return back to the river to roost.

It is at this time to change back to the shotgun again and start the late afternoon hunt. 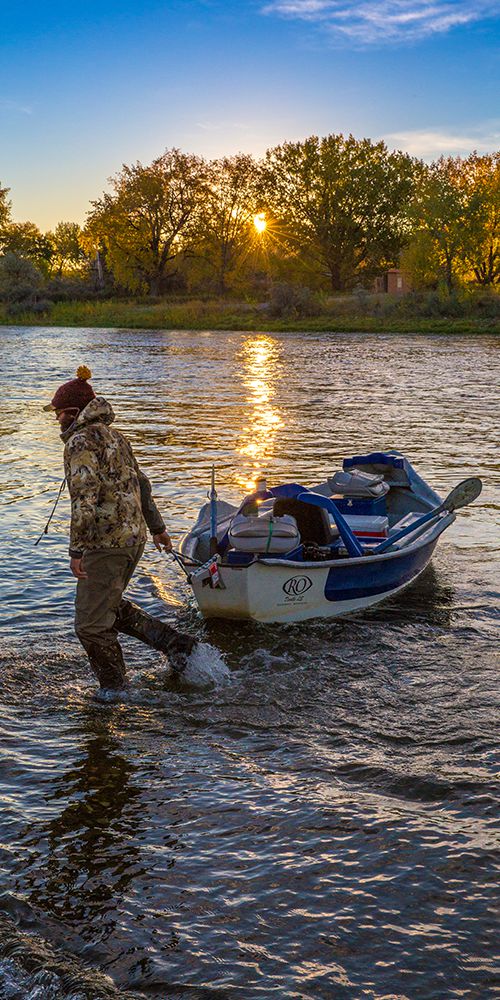 We have a team member ready to assist you!